Check out part 1 of Trevor Hudson’s Video Blog discussing topics from his new book, Discovering our Spiritual Identity. This week’s chapter is entitled “Our Picture of God” and invites you to explore how you perceive who and what God is.
(Thanks Willow Creek South Africa!)
Posted by WillowANZ at 2:17 PM

God Will Speak to You!

reposted from http://wcagls.blogspot.com/
In 2011, God is going to speak to you.

He’s been speaking to his kids since the beginning of time. He loves you and He’d love to have a bigger place in your life. God would love to open doors for you that you think can’t be opened. He’d love to take you on adventures that you think your life can never be about. God would love to whisper to you about the poor, about race, about greed, or other things that wreck this world. Broken things in this world don’t get fixed unless someone receives a whisper from God, steps up, steps out on faith, and does something about it.

So God is going to be speaking to you this year. My question is will you hear it and heed it? You will never regret this! But it actually takes a decision! Will you take the risks to walk by faith and not by sight?

Gordon MacDonald is coming to Australia!

Gordon MacDonald will be coming to Australia late March/early April to host Below the Waterline, a Team Leadership Seminar in Brisbane, Melbourne and Adelaide. Check out our website for details.
Your Regular Checkup - If a "physical" is important, so is a "spiritual"
My doctor's scheduler called several weeks ago and said it was time for my annual physical.
"Are you talking a whole-nine-yards physical?" I asked.
"Actually, ten yards," she responded.
A day or so later my dentist's scheduler called to say it was time for an annual check- up on my teeth.
I know I'm supposed to be thankful for both of these examinations, but the truth is that I'm not … until they're over. Why?
Well, how about the loss-of-dignity issue when they put you in that paper gown? Then there's that moment of realization when you know that they know you haven't kept all the promises you made during last year's examination (dropping a few pounds and flossing every day). Finally, and more seriously, there's always the chance that you'll hear bad news: a needed surgical procedure or a root canal.
Still, a wise person heeds the scheduler's summons and shows up at the appointed hour.
(this except was taken from Christianity Today - to read the entire article click here: http://www.christianitytoday.com/le/thepastor/soulspirit/yourregularcheckup.html) 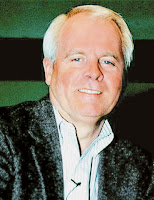 Gordon MacDonald is an author, speaker, and teacher. He was a pastor for more than 35 years, and holds the title of Pastor Emeritus at Grace Chapel in Lexington, Massachusetts, where he most recently served as senior minister. Gordon has written more than a dozen books and co-authored others with his wife, Gail. Ordering Your Private World, which won the Gold Medallion Award, has more than 1.5 million copies in print. His book, A Resilient Life, was heralded ‘a classic, riveting read’ by Publishers Weekly. Gordon serves as an Editor-at-Large with Leadership Journal. He is also Chairman of the Board of World Relief Corporation. He and Gail live in Canterbury, New Hampshire and have two children and five grandchildren.
Posted by WillowANZ at 10:45 AM

Other Blogs I Read